Venezuela Global is a non-profit organization duly registered with the Brazilian authorities with the aim of promoting the socio-economic integration of Venezuelan migrants and refugees into Brazilian society. To this end, we work with an emphasis on serving Venezuelan migrants and refugees in the city of Rio de Janeiro and other parts of Brazil, in partnership with a wide network of organizations and individuals.

The birth of Venezuela Global was the result of the voluntary work of the Venezuelan community in Rio de Janeiro, at least since 2014. From that year on, we started to create a support network for Venezuelan migrants and refugees in vulnerable situations. Our actions focused on assistance with food, medication, temporary financial support for access to housing, information on public services, including Brazilian government social programs, migration regularization and employment opportunities. The result of this articulation effort allowed the construction of an extensive network of organizations and people that today work together in Rio de Janeiro and other parts of Brazil.

Currently, our organization is working on projects focused on social assistance, migration regularization and economic integration. Among the initiatives is the Itinerant Immigration Consultancy Project, a pioneering action in partnership with the company Immigration Consulting and the NGO Ação Floresta da Barra, to aid Venezuelan migrants and refugees located in communities in the west zone of Rio de Janeiro, with the process of regularization of immigration and labor documentation. Consultancies are carried out directly in the community of Morro do Banco, Itanhangá, allowing to support more than 70 people since April 2021. 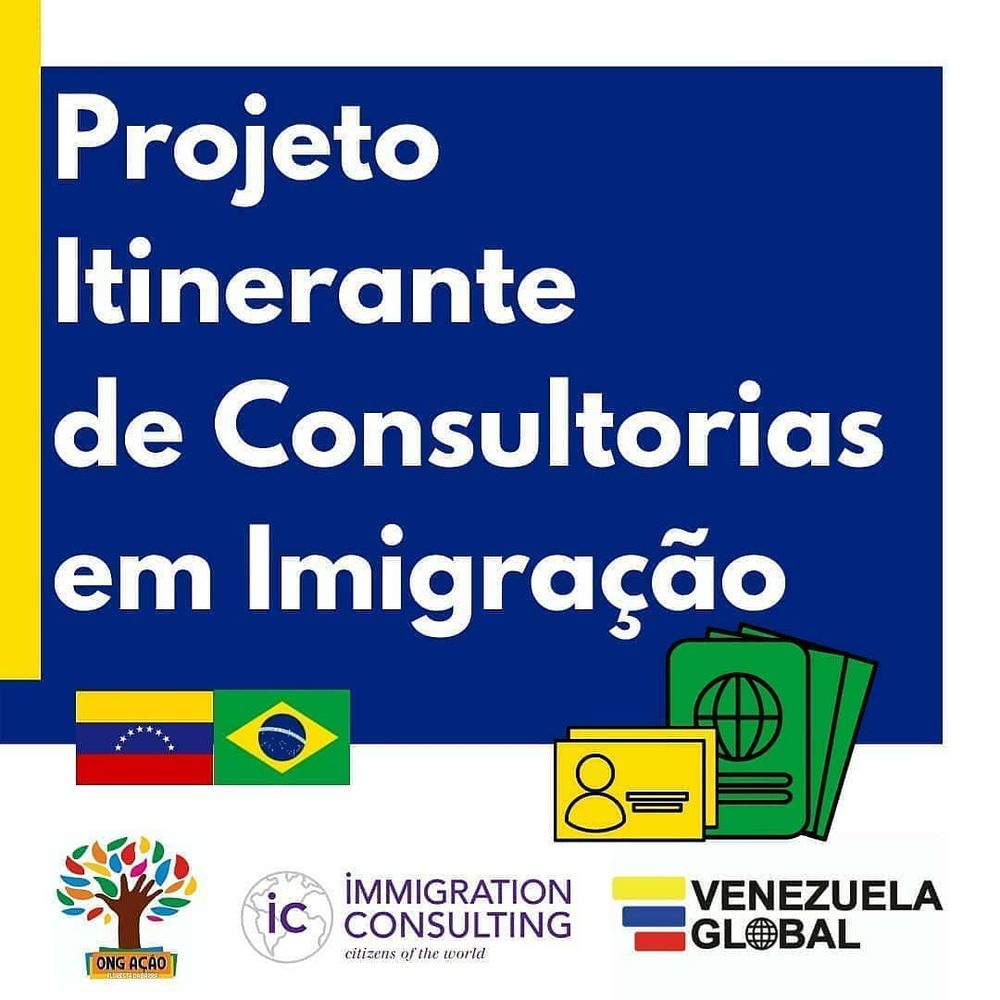 The Naturalizadinho Project, also launched in partnership with Immigration Consulting, is an initiative that seeks to support Venezuelan parents in the process of provisional naturalization of their children in Brazil, taking advantage of the facilities offered by Brazilian legislation in this area. By the end of 2021, the project hopes to support the naturalization process of between 70 to 100 Venezuelan children who meet the requirements for accessing Brazilian citizenship. The project Alimenta Solidariedade aims to support Venezuelan families in vulnerable situations in Rio de Janeiro through the donation of basic food baskets and other essential products. The project is funded by voluntary contributions, allowing support to more than 140 families since May 2020. In the next stages, the initiative will seek to collect the necessary support to finance training courses for Venezuelan migrants and refugees in the skills and occupations required by the Rio market.

In addition, we have been supporting initiatives of the local partner NGO of Morro do Banco, Ação Floresta da Barra, aimed at children and adolescents. Among the initiatives, we support the educational tutoring and cultural program for Venezuelan children helping with basic material (books, toys, colors, crayons) for the realization of the activities, as well as organizing round talks on cultural diversity, human rights, peace culture, among other topics.

As of September, Venezuela Global plans to start carrying out projects aimed at promoting new skills and competencies to access livelihoods. As part of the initiatives, preparations are underway for the first edition of the Cozinhando Talento RJ Project, with the objective of training Venezuelan migrants and refugees in the culinary sectors most in demand by the Rio market. The initiative is part of a partnership with Casa Venezuela São Paulo, with the financial support of the Embassy of the Republic of Slovakia and with technical support from the Brazilian Association of Financial Educators (ABEFIN) and the Union of Meal Workers (SINDIREFEIÇÕES).

Also, starting in September, Creative Economy Workshops will begin. The initiative seeks to train beneficiaries in production techniques for handicrafts with recycled material, promoting creativity in product development. In the first edition, there will be a bookbinding course with thread-based sewing techniques. The course will be held with the technical cooperation of Aissa Seidi, professional restorer of documents and founder of the Nomada Books brand.

Venezuela Global has been greatly supported by fundraising efforts led by friends and supporters of the project. However, our efforts are still far from the extent we would like to help. Please, help us to continue and expand our work. With your contribution, we will be able to help more Venezuelan families in their process of socioeconomic integration into Brazilian society.

What will we do with the funds raised

With your financial contribution, we will strengthen our initiatives to ensure that more Venezuelan families in Brazil have access to up-to-date immigration documentation, food on the table, employment opportunities for adults, and recreational and educational opportunities for children and teenagers. Venezuela Global is a non-profit organization duly registered with the Brazilian authorities in March 2021. However, we have been carrying out voluntary work to assist Venezuelan migrants and refugees in vulnerable situations since  2014 through different actions aimed at supporting these people in their integration process into  Brazilian society.

Since 2014, as members of the Venezuelan community in Rio de Janeiro, we began the creation of a  support network for Venezuelan migrants and refugees in vulnerable situations. Our actions focused on assistance with food, medicine, temporary financial support to access housing, information on public services, including social programs of the Brazilian government, immigration regularization, and employment opportunities.

This informal network, effective in many cases, allowed the creation of different spaces for the articulation of the Venezuelan community, such as face-to-face meetings to discuss initiatives, celebrations of historical dates in Venezuela, the creation of WhatsApp and Facebook groups, and Instagram accounts to exchange useful information. In these efforts, the Venezuelan network in Rio worked in partnership with representatives of different organizations, such as Pares Caritas, the Institute for  Migration and Human Rights, and the Secretariat for Human Rights of the State of Rio de Janeiro.

Among the actions with the greatest impact, in 2017, in the context of the increase in the Venezuelan migratory flow to Brazil, we organized a campaign to collect food, products for babies and children,  clothing and footwear in good condition, to be sent to the northern state of Roraima with the support of the Human Rights Secretariat of the Rio de Janeiro state government.

Also in 2017, from Rio de Janeiro we participated in the organization of a public consultation called by the Venezuelan Parliament. In Brazil, Venezuelans in Rio de Janeiro led an effort to articulate with  Venezuelan communities in other Brazilian cities that were also participating. This initiative allowed us to work in a coordinated manner in the organization of this event in seven cities of Brazil, managing to generate a greater impact on Brazilian public opinion about the Venezuelan migration crisis that was already impacting the countries of South America.

Participation in this consultation allowed us to expand the supporting network of our community to the seven Brazilian states where this event was held and the birth of the Network of Venezuelans in  Brazil, a platform for organizations and individuals focused on the defense of rights human and support the for Venezuelan migrants and refugees in their process of integration into Brazilian society, which today has a presence in twenty cities in Brazil.

Working with this supporting network motivated us to think about formalization as a civil society organization. In 2018 and 2019, while our team discussed the drafting of our statutes and how to advance in the registration process, we carried out other initiatives in addition to social action, such as the creation of a resumes bank and the provision of psychological assistance with the collaboration of volunteer psychologists.

In 2020, the economic impact of the measures adopted by the Brazilian government to restrain the spread of covid-19 represented a significant challenge for our community in Rio de Janeiro and other parts of this country. Seeking to serve the most vulnerable Venezuelans, especially those who had just arrived in Rio de Janeiro through Operation Acolhida. As a consequence of the Venezuelan migratory crisis in Brazil, the Venezuelan network in Rio de Janeiro began to cooperate with the federal government and other public and private entities in initiatives oriented to support the Venezuelan population arriving at this city and other parts of the country. In this matter, the network in Rio began a campaign to collect food and other basic products. With the donations received we were able to support more than 140 vulnerable Venezuelan families between August and December of 2020. With the in-kind donations we received, in addition to food, we supported Venezuelan families by covering the costs of logistics for the distribution of basic food boxes, financially supporting the purchase of medicines, in the search for employment, and, in specific cases, helping with the rent payment.

The level of need of the Venezuelan community in the context of a pandemic turned out to be much higher than the capacity for help that, as volunteers and with our own resources, we could provide. These conditions, in addition to greater awareness of the dimensions of the challenge of the socio-economic integration of the Venezuelan community in Rio de Janeiro, led us to resume the formalization plans as an organization.

As a result, in March 2021 Venezuela Global was founded. In this new stage, we decided to work on building capacities to act in four areas: (i) assistance to migrants and refugees in matters of migratory regularization; (ii) social assistance; (iii)  economic integration - employability and entrepreneurship; and (iv) research, documentation, and dissemination.

For more information, please enter in our website: https://www.venezuelaglobal.org/